In the history of Western painting, the most famous pictures of maternities represent the Virgin with the child Jesus . As well in the Gothic tradition as in that of the Renaissance, the attention of the painter and of the spectator is focused on the characters. In the Gothic tradition the setting stands against a background of gold to which it can be often reduced; it is subordinated to the iconography, figures of saints and/or troop of angels. It is thus supernatural, which is explained by the subject. That subject is the image of the spiritual place from where Christian faith radiates, and thus is stamped with majesty.

The Italian Renaissance introduced there the expression of Grace, a sublimated form of human appearance. It often places the Virgin and the child in a natural setting, interior or landscape, but which presents a general and timeless characteristic. It even happens that the setting disappears and is reduced to a dark background, as in Madonna of the Grand Duke, by Raphael.

On the other hand, the prodigious Flemish primitives introduce in the subject a naturalist dimension. They make of the Virgin and the Baby Jesus, a mother and a child, participant of the generality of human condition, and immersed in a natural setting. When it is an interior it often has an opening on a landscape.

In the Christian dogma, the topic of mother-child relationship, when it is of the Virgin and child Jesus, is presented in the form of an irruption of supernatural in the natural order. However the natural order does not disappear, as pointed out by these Gothic paintings of Nativities, where all the animals of the stable appear. 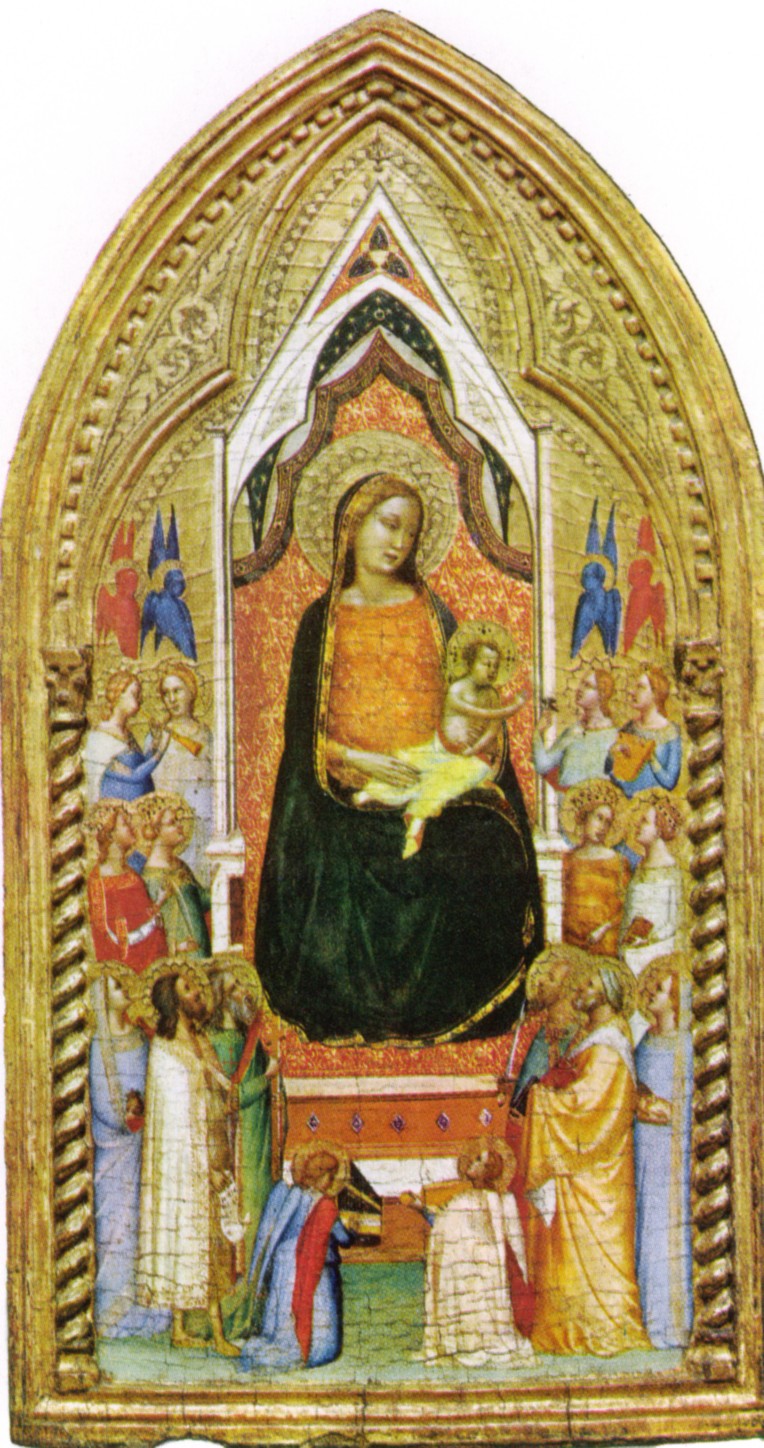 In consequence of the absence of prospect, the figures appear superimposed on various levels. The composition is subjected to the religious iconography. 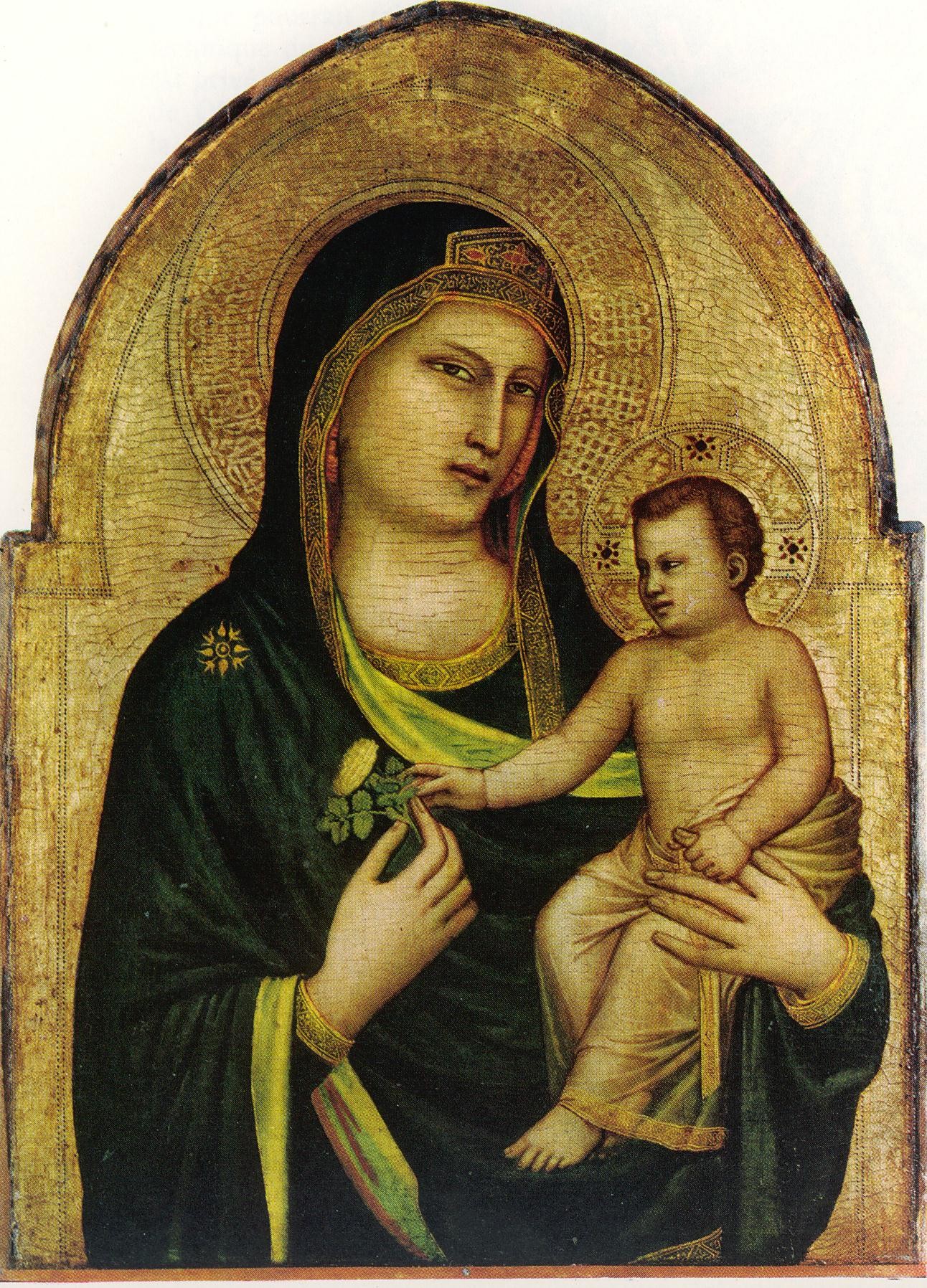 Giotto kept here the gold background peculiar to Gothic art. But he announces the Renaissance by fact, inter alia, of individualizing his characters. 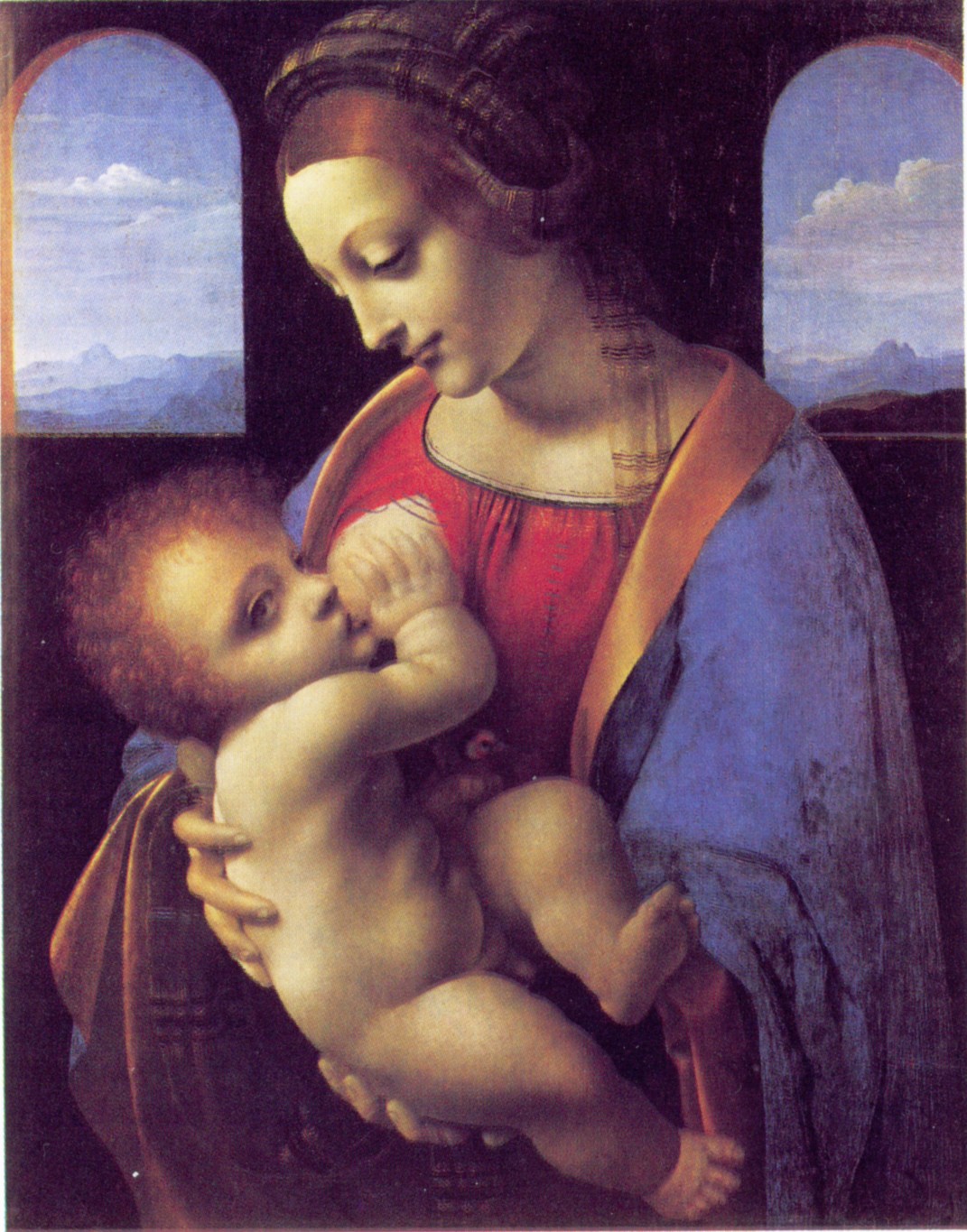 The expression of Grace reaches a top here. The background and the landscape are almost abstract. 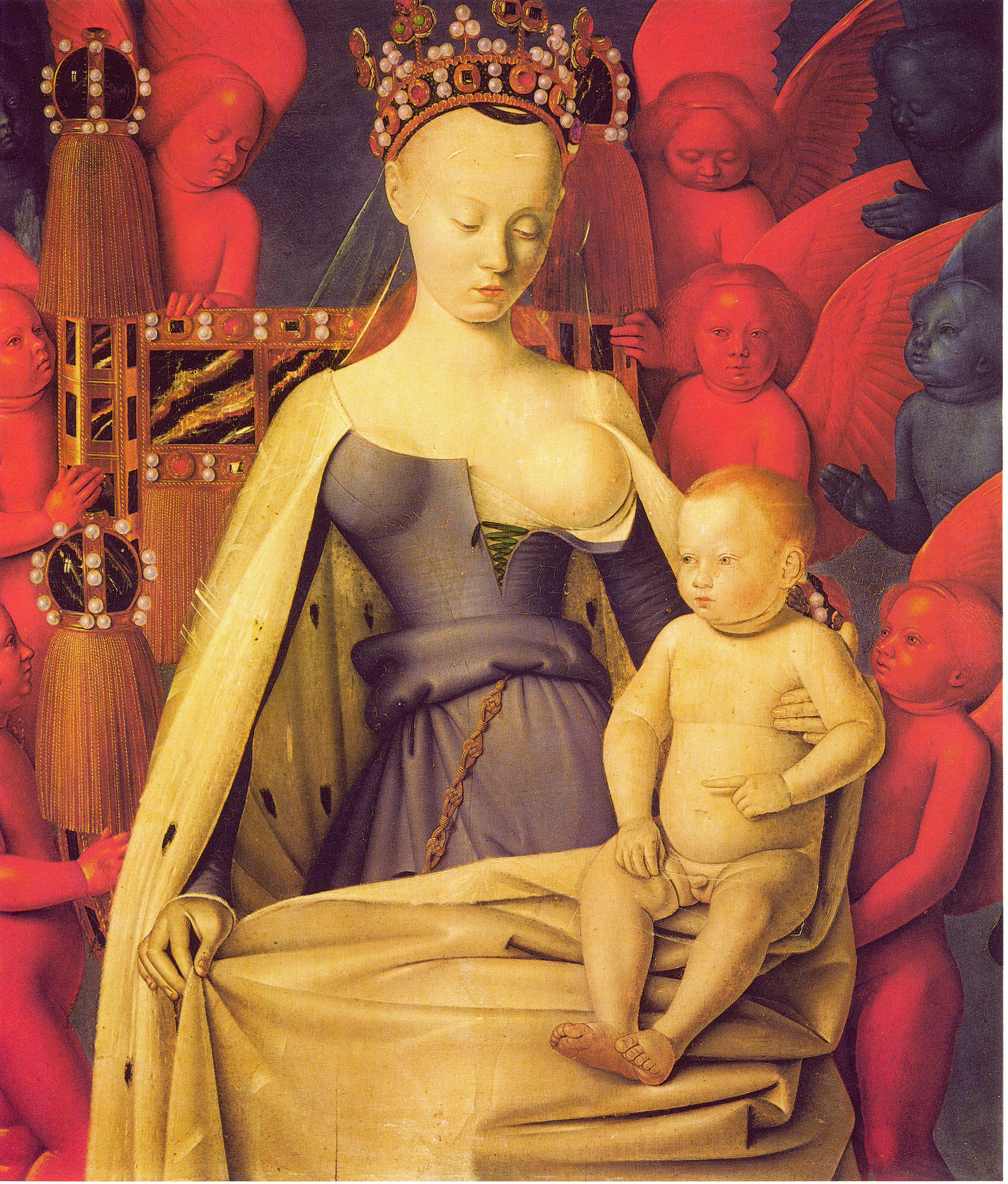 In this admirable painting by Jean Fouquet, the distribution between flat surfaces and volumes, between colours and lines fulfils utterly the requirements of what Fernand LÃ©ger calls realism of conception and subjected to pure plastic criteria. But that distribution creates by itself a space, an abstract space, for a supernatural purpose. It can be said about this painting that it is supernaturalist. Against this purple background, the Virgin and the child seem remote, as if there was an inversion of the space connections. From this intangible and virginal beauty, with her uncovered and hemispherical breast, emerges a chilly eroticism. Although he largely assimilated the inventions, the perspective inter alia, of the Italian Renaissance, Fouquet remains impregnated with a Gothic spirit. 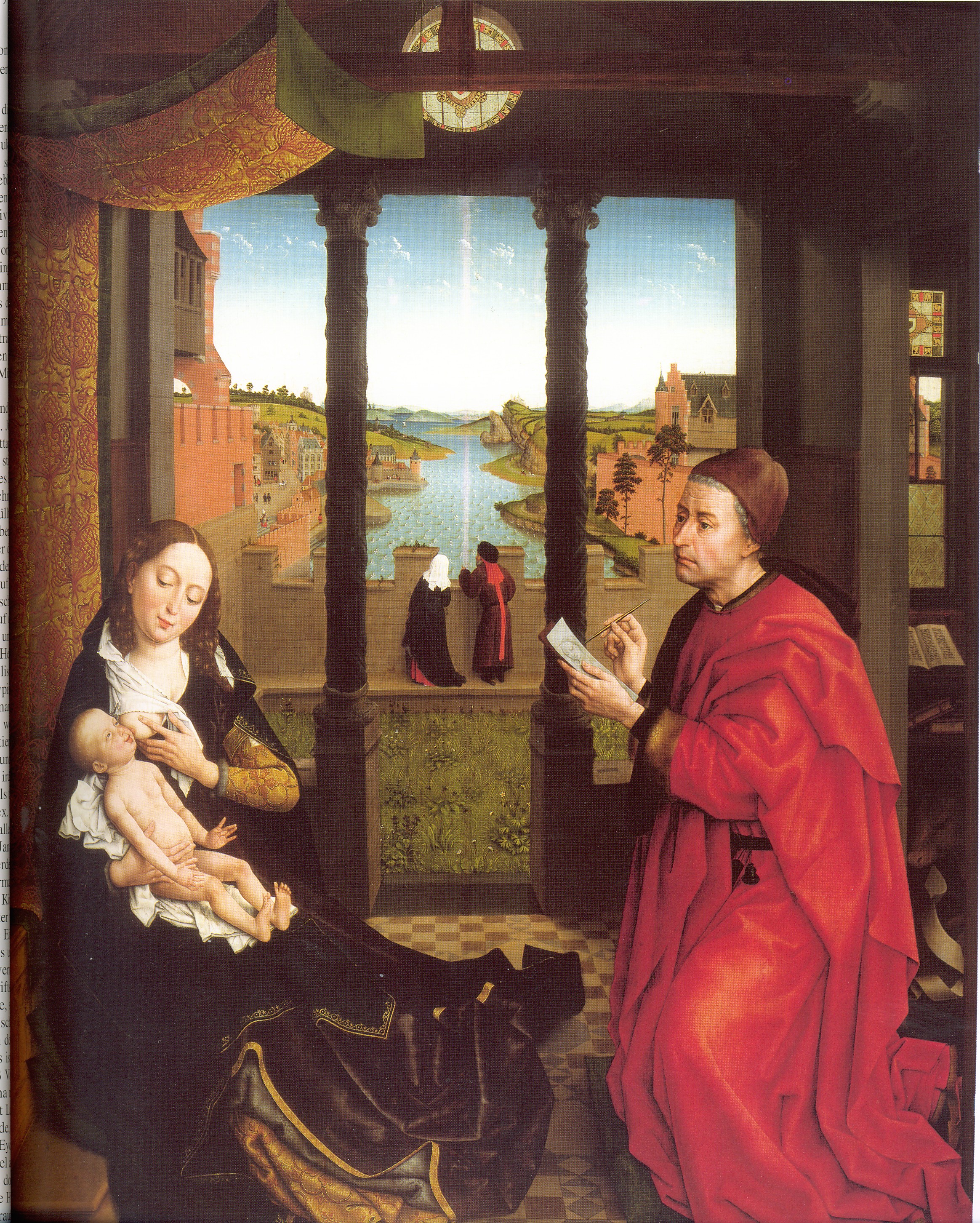 This pictures realizes an interpenetration of the secular and the sacred fields. The Virgin, a simple woman, suckles her child. The window looks onto a splendid landscape with two persons leaning on a parapet are talking with each other while gazing at the river. In this superb scene with inside and the outside, the painter painted Saint Luc painting. The theme is the Virgin and Child ; it is as well the painting itself, and especially the flamish painting with its genius for lanscape.

As for me, it is the profane topic of mother with her infant or her little child that I treated, although there is, in this entry in life and in daylight something which can cause an almost religious feeling. The setting is often a country house, in which the window acts as a dynamic passage between the interior and the outside. The direction of the light often indicates the hour of the scene. The light is the third protagonist and I use multidimensionality to render the mother's feeling of the light penetrating the room. 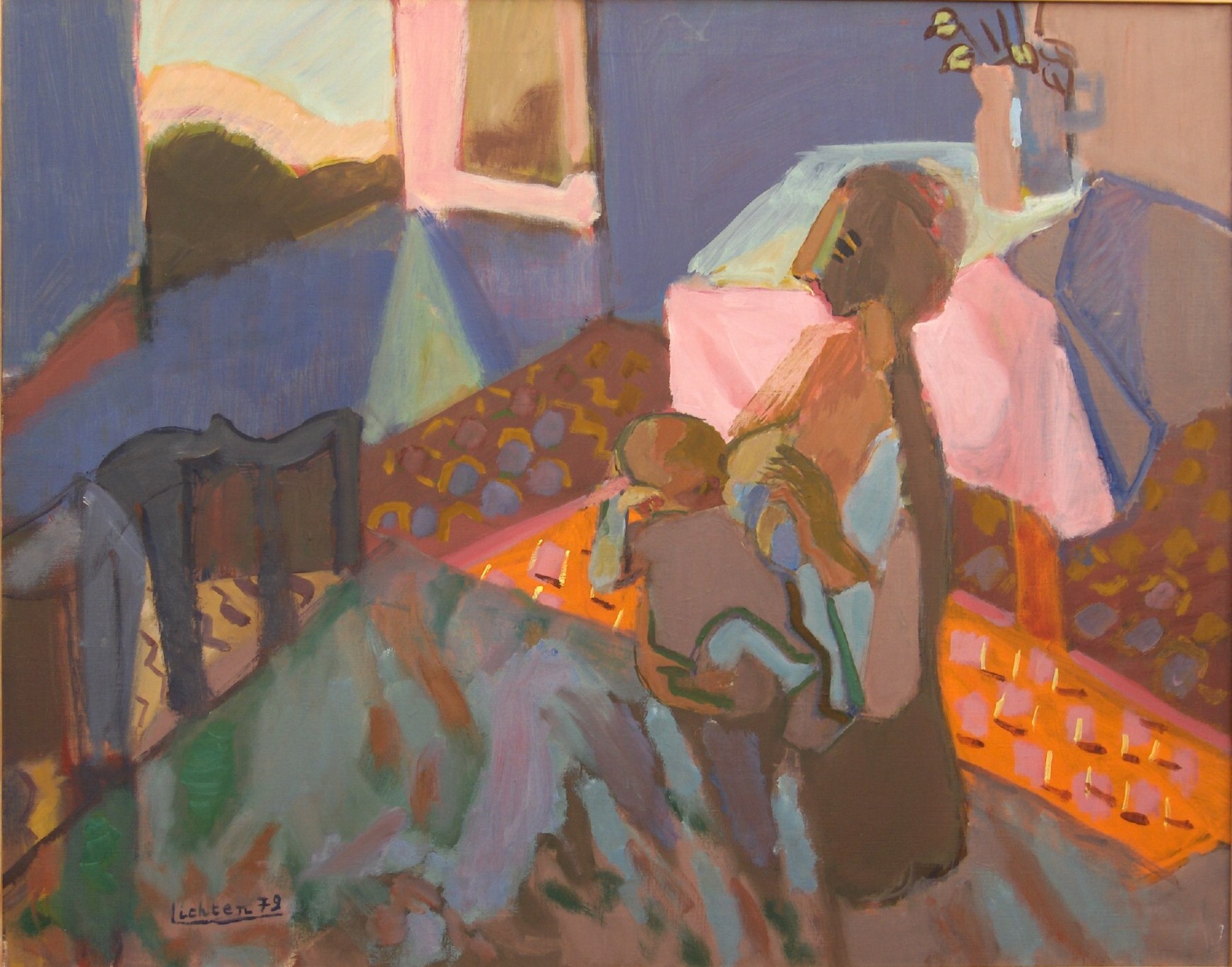 This is my first version of the theme maternity. The morning sun licks the tiled floor. Mother and child are closely together and against the light. In order to foil the masking of the infant by the mother's body, which is almost facing the window. In order to give its full presence to this country room, a sophisticated construction has been necessary, disobeying the laws of classical perspective. 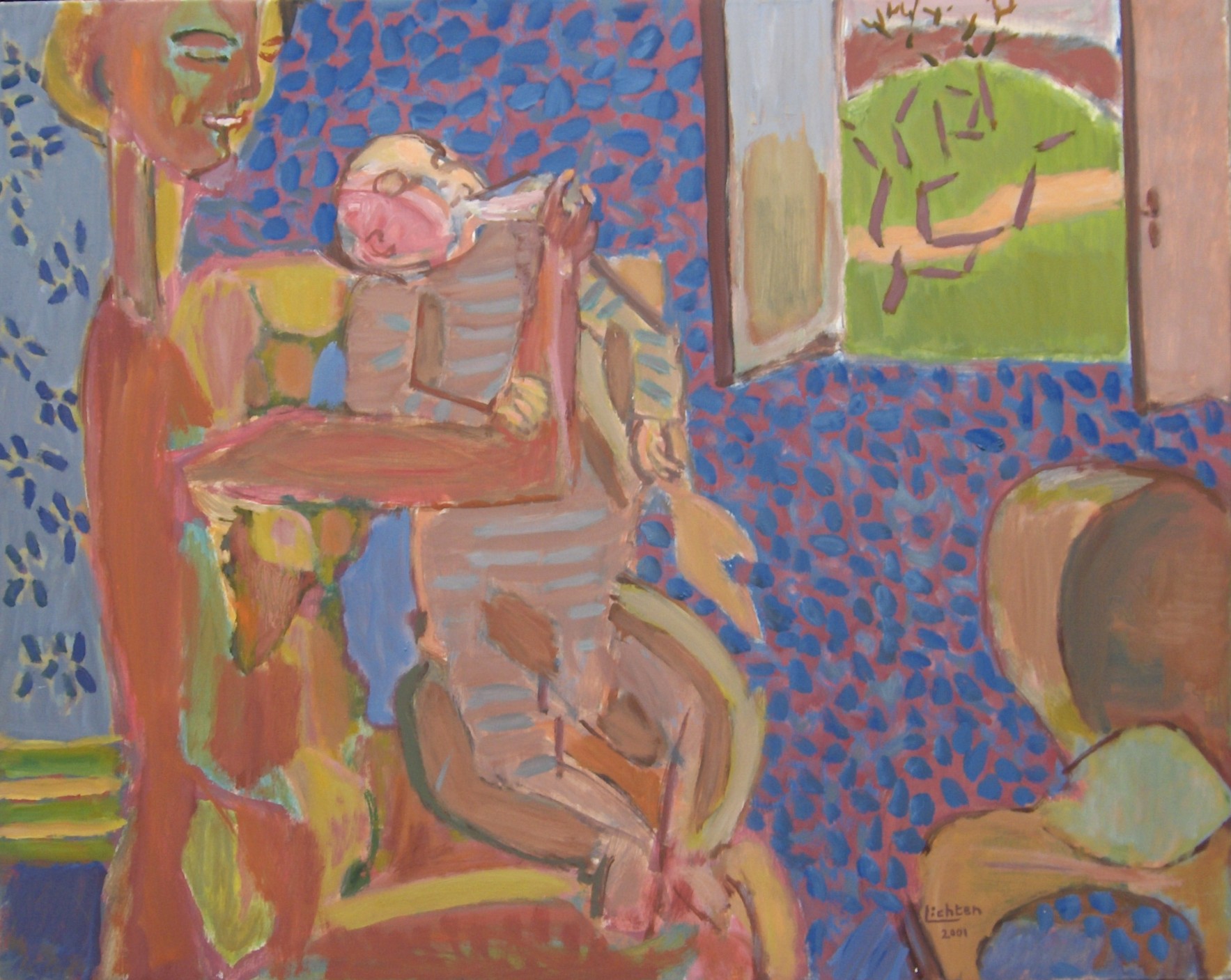 Mother and child are no more closely together. This deliberate distance does not exclude tenderness. But the window indicates that the child will have to go away some day. 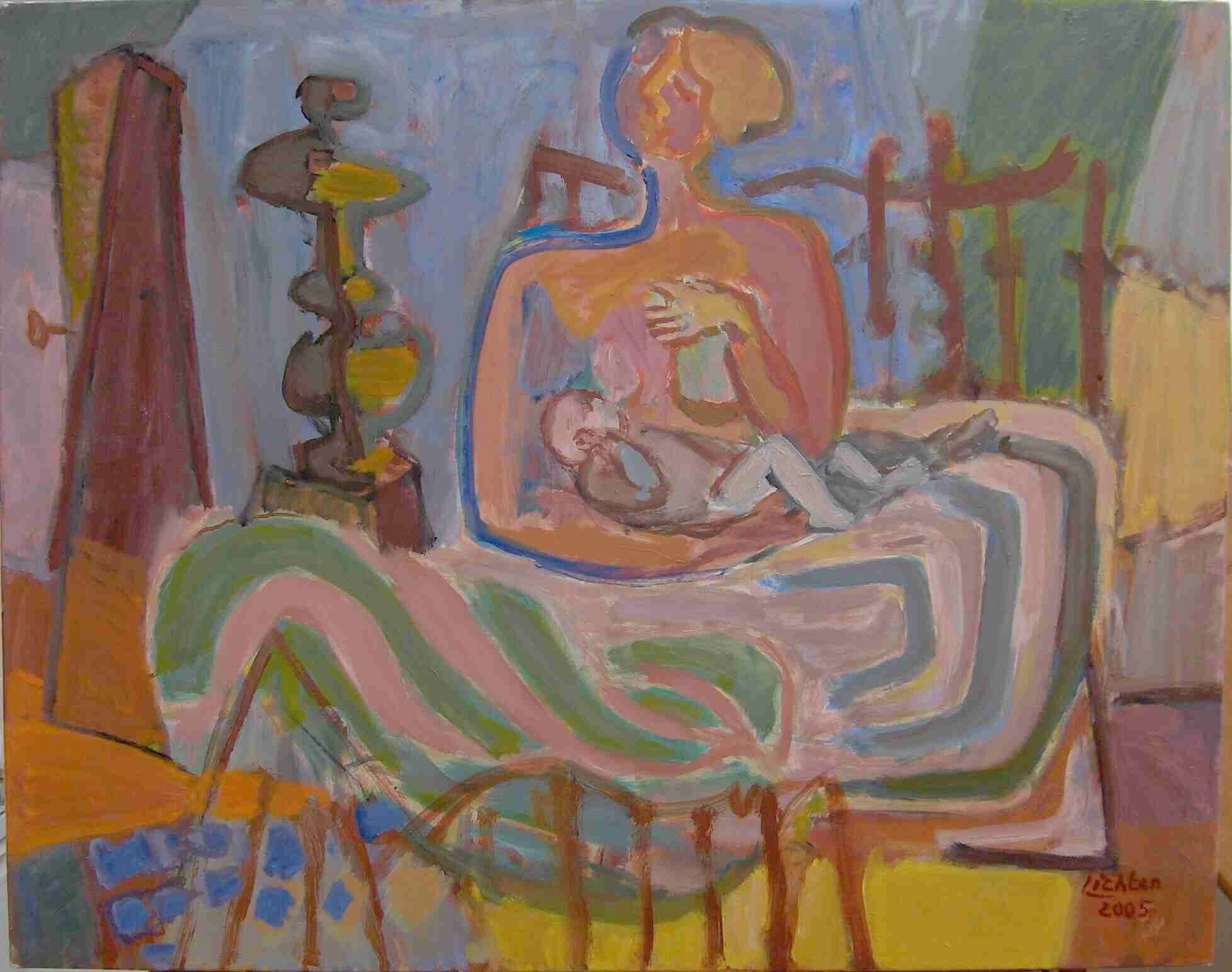 This is again a morning maternity. Here the mother is seen at the same time full-face and three quarter. The unit of theese several spaces is demanded in order to express the importance of the moment and of the surrounding world. A ray of sun licks a part of the bed and reaches the back of the room: it is a way of making the spectator feel the simutaneous presence of the room and of the outside space. Mother and child are still in a slight half-light. 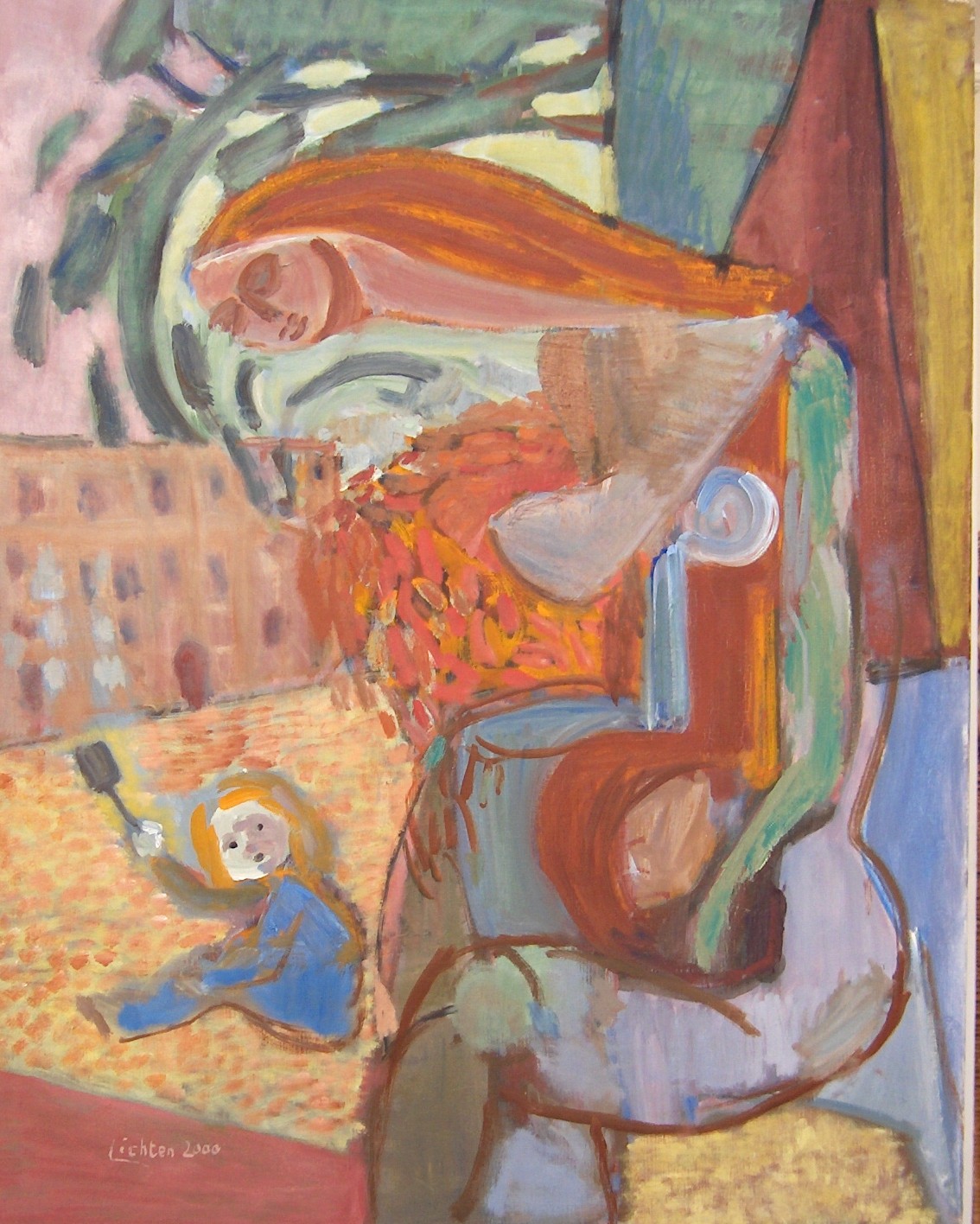 Albert Lichten - Maternity in a public garden - 2000 - oil on canvas

This picture is violently disobeying the laws of classical perspective, as well as it is dealing in a violent way with the shapes of the mother's body. The topic wanted it to be so : the little girl is envelopped in the motherly presence and gaze. The circle is however not closed, it opens on the left.


Return to the top of the page