The images of towns places, according to the diveristy of their structures, are caracteristic of the manner an artist or a period of painting, each of them have their own representation of space.

You will find out further on that my paintings about town places include the perception of time.

A toplogical and symbolic representation of space 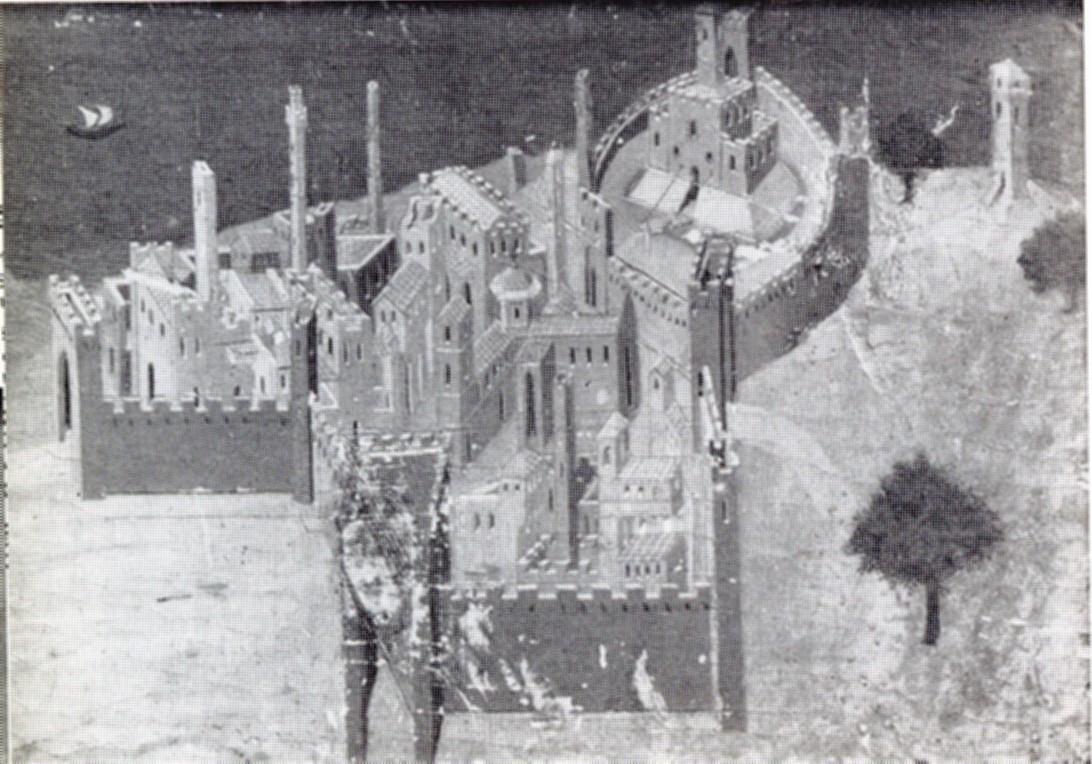 Town still medieval enclosed in its ramparts, in order to insure its defense but offering also a contracted image of the human world. Around the town from on side the sea with a ship, on the other side the shore with three scattered trees and an undressed woman who prepares to bath; in short, a minimal evocation of the surrounding universe. Although firmly structured by a set of ridges, this closed place, is more a toplogic than a geometrical space. It is a metaphore of what a human place is, metaphore which suggests a space from which every part of routes are visible. That gaze, the painter's one as well as the spectator's one remains outside the site, in a flying over postion, which yet is not like a map or a view from a plane. One has to note the contrivances, such as raising the cicular part (at the top left corner) which allows to foil the hidding of things by one another.

A perfect example of classical perspective (perspectiva artificialis) a codification of Quattrocento researches leading to the construction of the ""scenic cube"". It is the triumph of a rational order imposed upon the visible things thanks to the convergence of the lines leading to a vanshing point. The conception of the town has changed for two reasons. On the one hand for political motives : in the mind of the Renaissance humanists (especially the Florentines ones), the town become the place of the connection between the citizens (the public square plays a very important role). On the other hand the mind has to control intellectualy a world whose extent has much increased, thanks to the great geographical dicoveries. It does it using the perspective, a contruction that applies to every visible thing from the observer's location. That is why the town is no more a closed place. It is connected to rest of the world by the perspective. 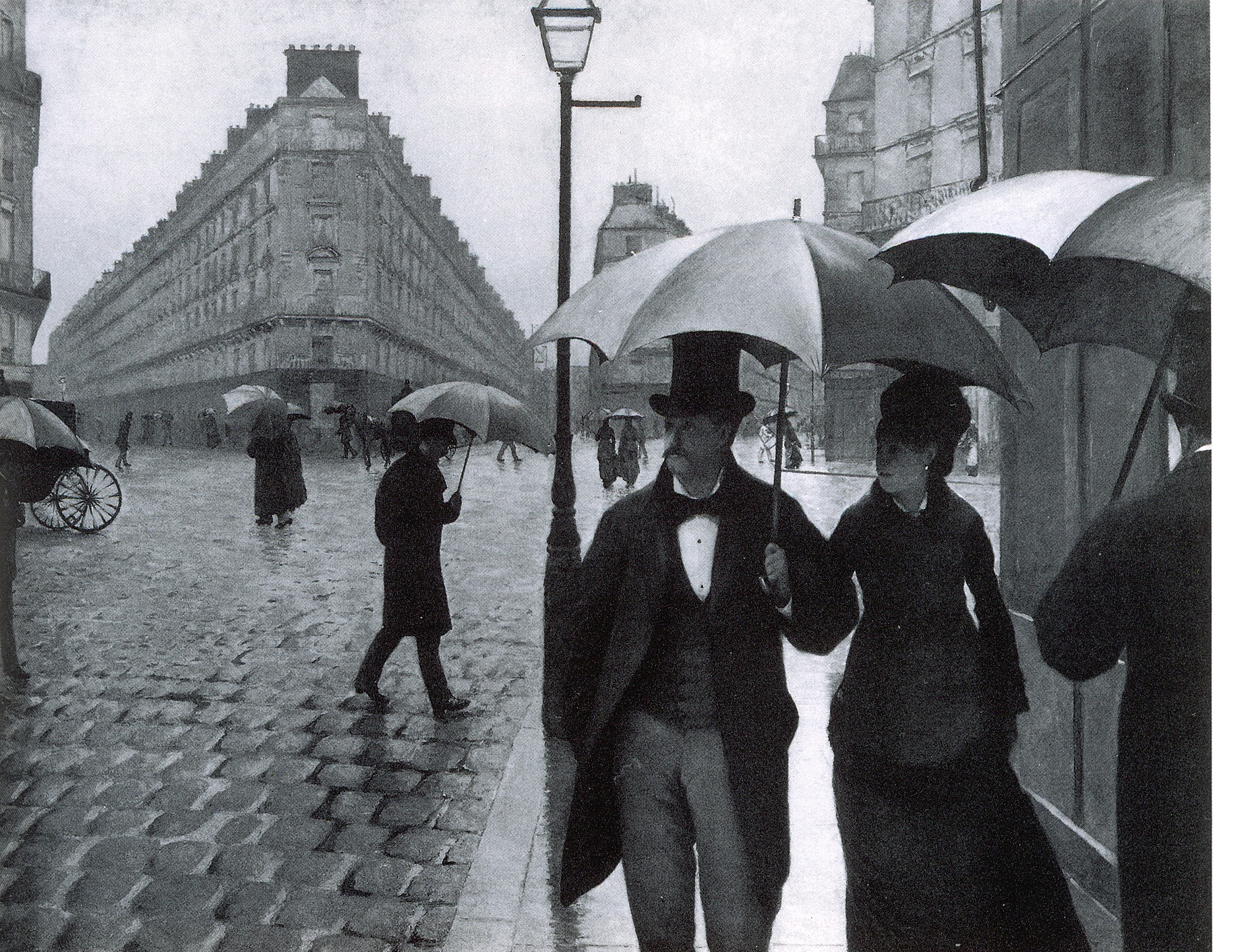 Gustave Caillebotte extends the use of perspective up to the point of taking advantage of photographic processes. In this picture the horizon line is exactly at the level as main character's eye, as if he were the photographer himself. The size of the houses decreases very rapidely towards the background.

My approach is different to the one Lorenzetti who puts himself in a position of an intellectual flying over the site. It is even more different to that of Luciano Laurana who constructs his image from the unique point of view of a motionless observer. On one hand it is not from the outside, but from the heart of the town place, that I try to spread my space. On the other hand my vision does satisfy itself in taking an instantaneous view from a unique point : I introduced time, mamely the walker feeling of the route he goes through. In my pictures, I don't juxtapose instantaneous views but I make a synthesis of views. It is obvious that my paintings have nothing to do with the art of the photographer who chooses always the instant and the good angle. Picasso made portrait in which the face is reprensented front and the nose from the side. That is why I called my views of town places,portraits. 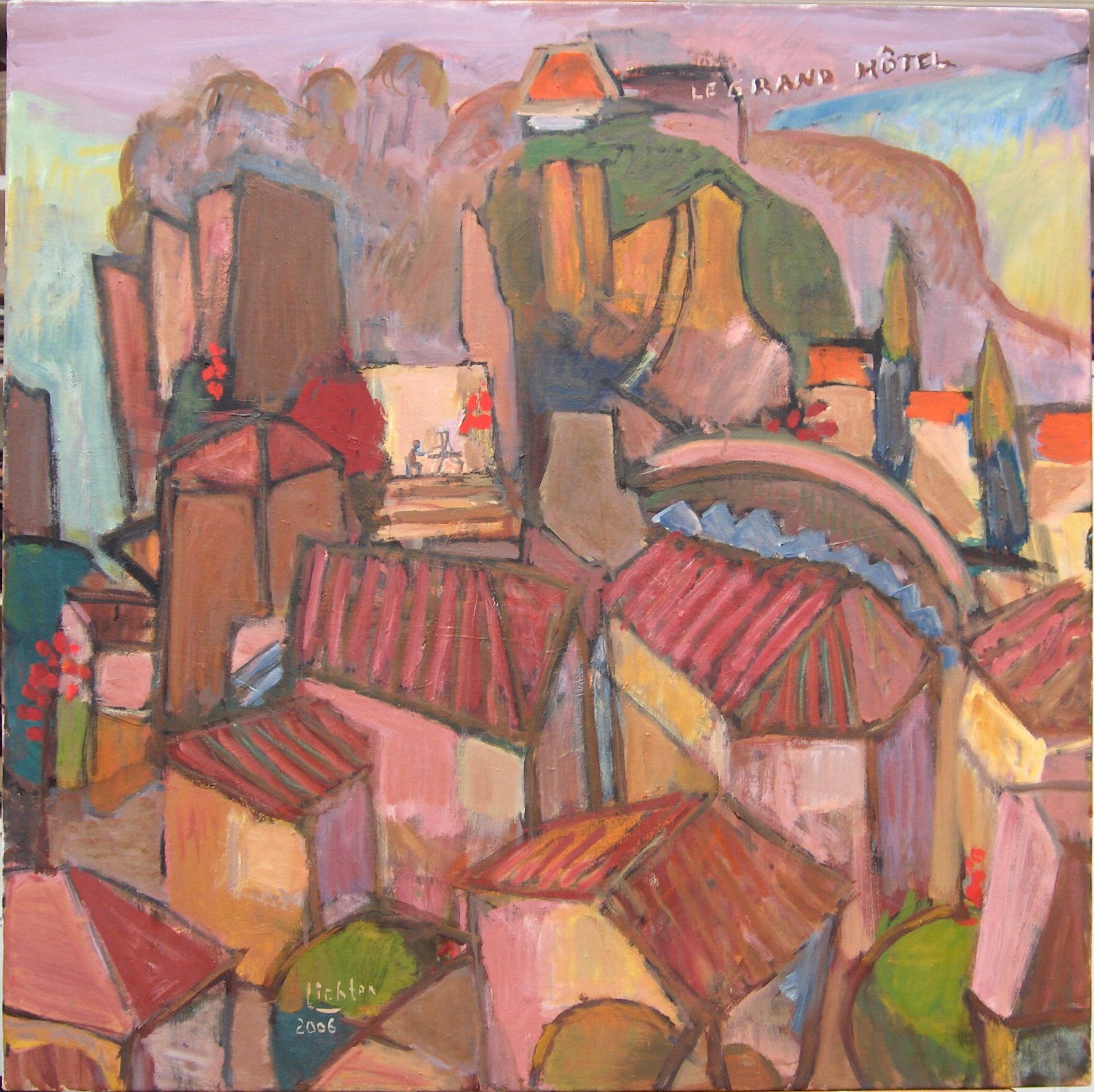 This canvas can be compared to an autobiographical story. The painter is in heart of the big village ""Borme les Mimosas"". It is the end of the day, so the light is brushing. The painter who is here represented, remembers the alleys he went through, the stairs he went up and down, the ""Grand Hotel"" above the village. He is in his mind in several places at the same time. The painter who made this painting, that is myself, telling his own story, choosed the best place to reprent himself in this space time canvas. 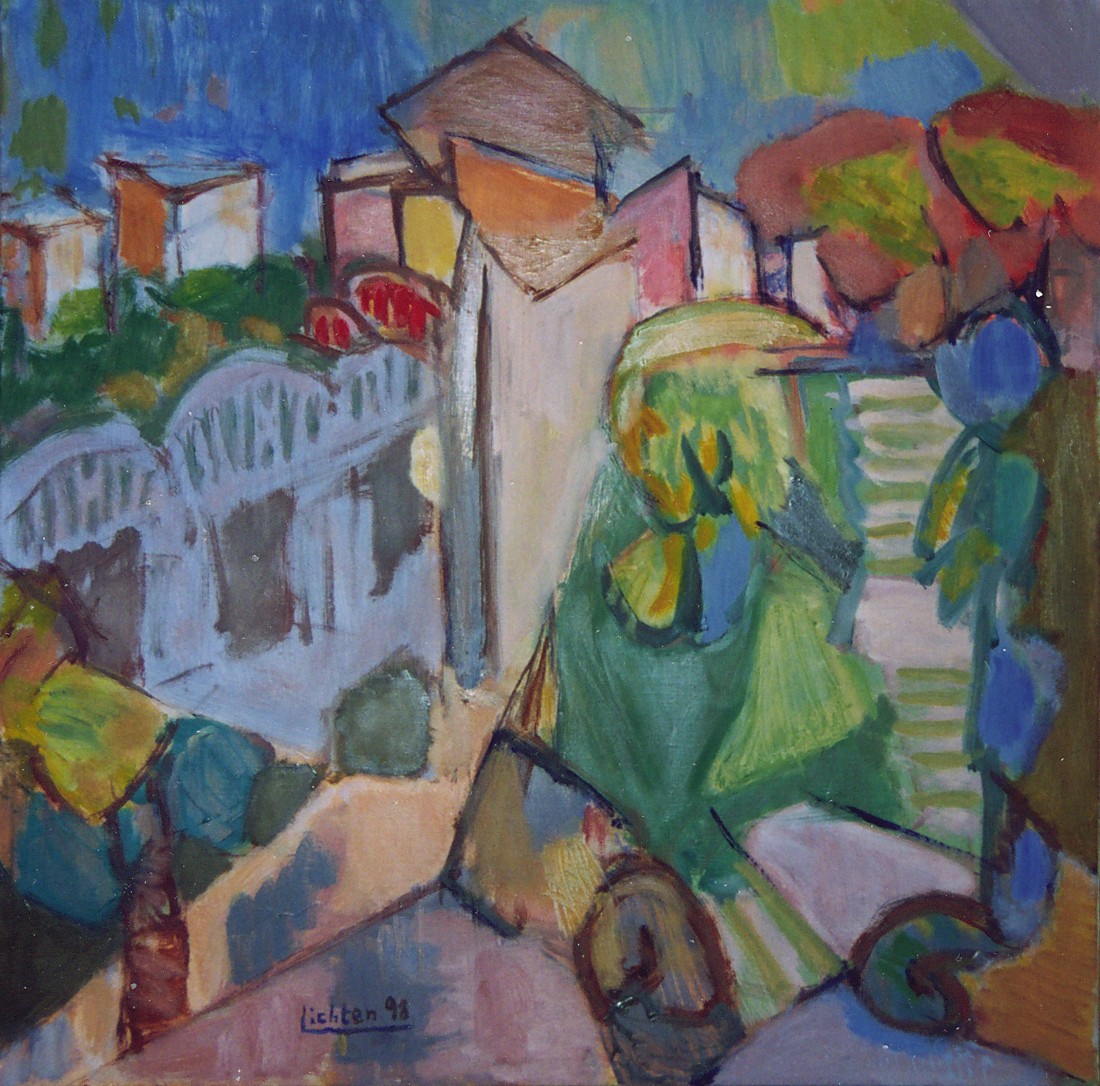 A synthesis of part of the August Blanqui boulevard in Paris with viaduct of the overhead rail (métro aréien),
and the stairs that lead to the small ""Butte aux Cailles"" district, well known by American tourists. 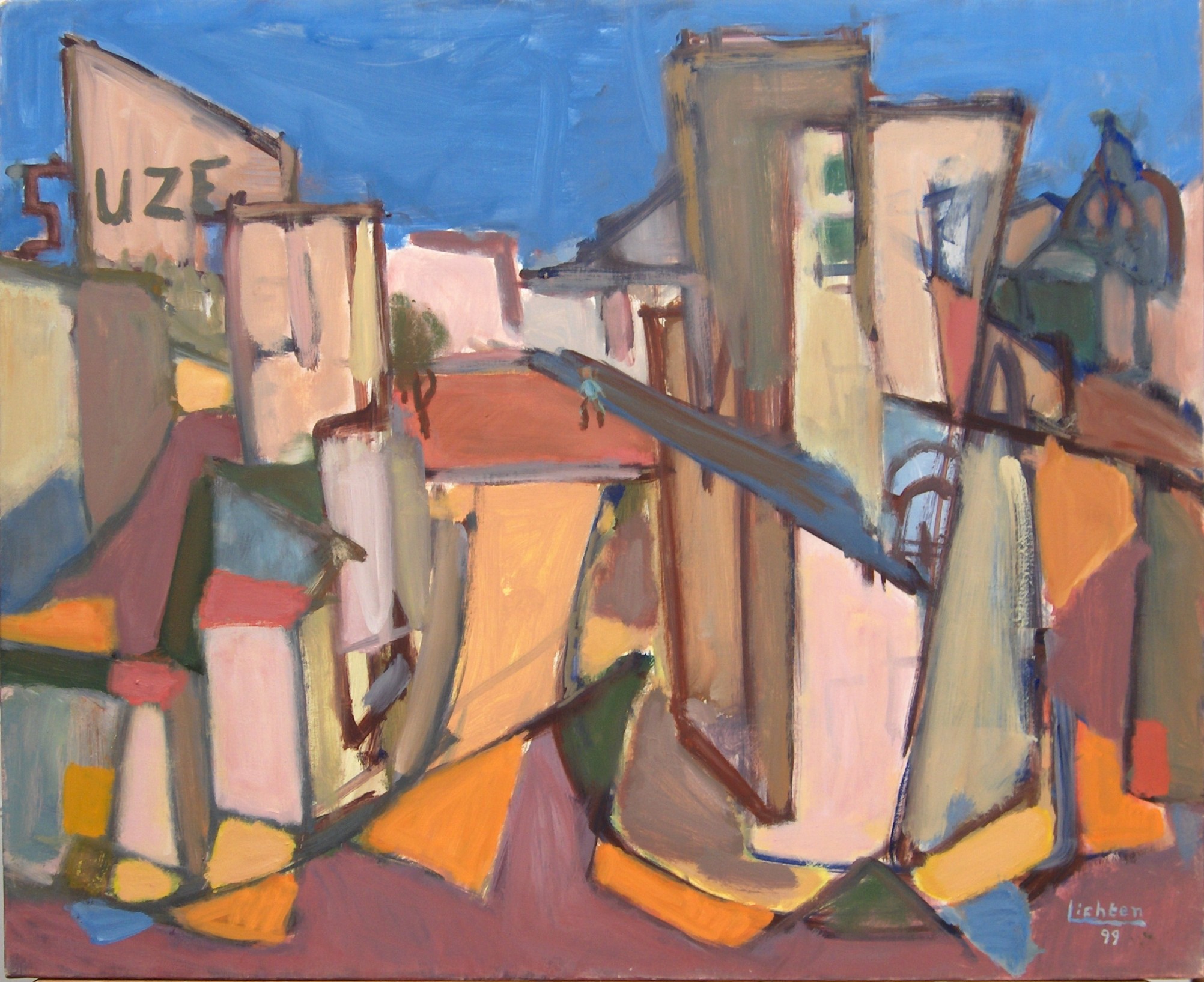 This canvas marks one of my first approaches of the theme of ""Butte aux Cailles"". It is my first victory against perspective, it lessens the size of the houses of the foreground in order to foil their masking effect. One guesses the presence of the dome of ""Saint-Anne"" Church. Likewise, the old advertisement of the ApÃ©ritif ""Suze"", which used to be the bottom of Barrault street, was pulled by me by force and put above the junction of the two streets. 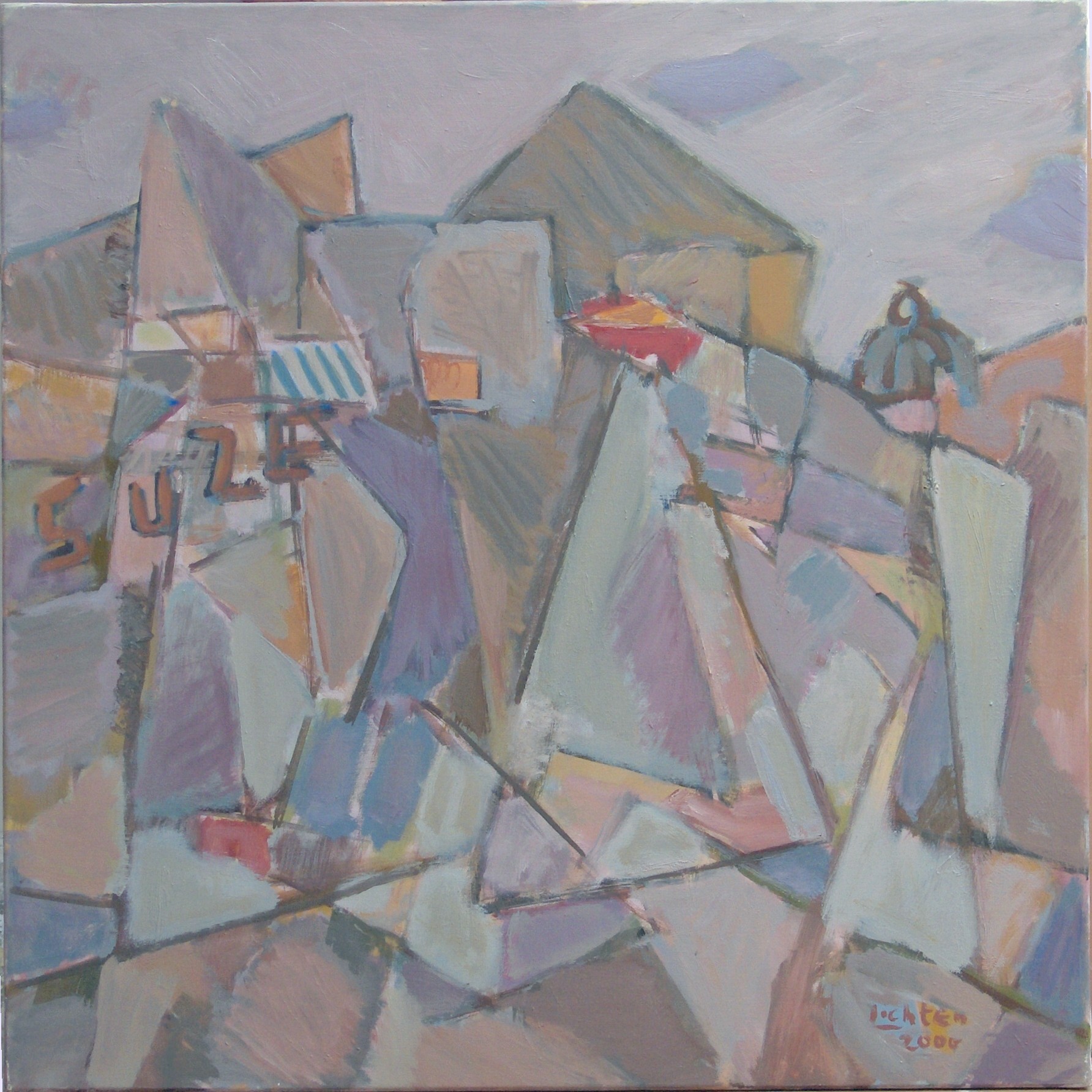 This approach of ""Butte of Cailles"" in a grey weather testifies of a more synthetic and abtract choise. The planes are slinding upon one another. The gaze keeps still in menmory the old advertisement""Suze"", but it also anticipates what the walker will discover, such as the greengrocer's awning which appears at the top left of the canvas.

This is a walk through the ""Butte aux Cailles"", that small district in Paris which is a kind of village on plateau, a little world by itself. It is bordered by August Blanqui boulevard, Barrault street and Bobillot street. It expresses an abtract choise. On will note the use of writing signs, the work on texture and on lines.